Al-Ahsa, sometimes Al-Hasa, El Hasa, or Hadjar is a traditional oasis region in eastern Saudi Arabia. The oasis is about 60 km inland from the Persian Gulf. 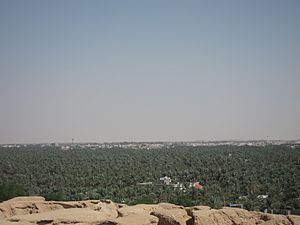 Al-Ahsa is part of the region known historically as Al-Bahrayn. It includes the eastern coast of the Arabian Peninsula down to the borders of Oman. It also includes the island of Awal (modern-day Bahrain).

Al-Hasa has one of the largest numbers of Shia Muslims in mostly Sunni Saudi Arabia.

With an area of around 85.4 km2 (33.0 sq mi), Al-Ahsa Oasis is the largest oasis in the world. There are more than 2.5 million palm trees including date palms in the oasis, which is fed from a huge underground aquifer and irrigated by the flow of more than 280 artesian springs, which allows agriculture all year round in a region that is otherwise sand desert.

All content from Kiddle encyclopedia articles (including the article images and facts) can be freely used under Attribution-ShareAlike license, unless stated otherwise. Cite this article:
Al-Hasa Facts for Kids. Kiddle Encyclopedia.