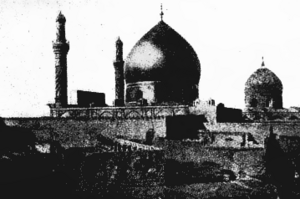 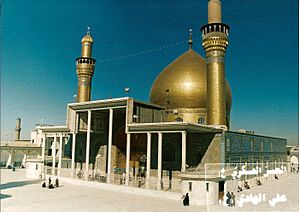 The mosque before the first bombing in 2006

The remains of the tenth and eleventh Shī`a Imāms, `Alī l-Hādī and his son Hassan al-`Askarī, known as "the two `Askarīs" (al-`Askariyyān), rest at the shrine. It stands next to a shrine to the Twelfth or "Hidden" Imām, Muħammad al-Mahdī. The `Askariyya Shrine is also known as the "Tomb or Mausoleum of the Two Imāms", "the Tomb of Imāms `Alī l-Hādī and Hassan al-`Askarī" and al-Hadhratu l-`Askariyya.

Also buried inside the Mosque are the remains of Hakimah Khatun, sister of `Alī l-Hādī, and of Narjis Khatun, mother of Muħammad al-Mahdi.

Time magazine reported at the time of the Al Askari Mosque bombing that “al-Askari [is] one of Shi'ite Islam's holiest sites. Only the shrines of Najaf and Karbala are more important. Even Samarra's Sunnis hold al-Askari in high esteem. The expression 'to swear by the shrine' is routinely used by both communities".

The Imāms `Alī l-Hādī (also known as an-Naqī) and Hassan al-`Askarī lived under house arrest in the part of Samarra that had been Caliph al-Mu'tasim's military camp (`Askaru l-Mu'tasim). As a result, they are known as the `Askariyyān ("Dwellers in the Camp"). They died and were buried in their house on Abī Ahmad Street near the mosque built by Mu'tasim. A later tradition attributes their deaths to poison.

The shrine around their tombs was built in 944 by the Hamdanid governor Nasīr ad-Dawla. It became a focus for pilgrims. It was developed and rebuilt several times in following centuries, including, in particular, by Arslan al-Basasiri around 1053 and by Caliph an-Nasīr li-Dīn Allāh in 1209.

Nasir ad-Din Shah Qajar undertook the latest remodelling of the shrine in 1868, with the golden dome added in 1905. Covered in 72,000 gold pieces and surrounded by walls of light blue tiles, the dome was a dominant feature of the Samarra skyline. It was approximately 20 metres in diameter by 68 metres high. 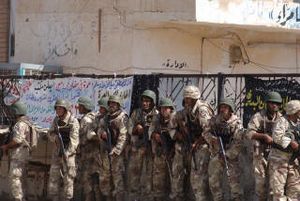 Iraqi National Guard soldiers prepare to storm the mosque in Samarra in 2004.

On February 22, 2006, at 6:55 a.m. local time (0355 UTC) explosions occurred at the mosque. The explosions destroyed its golden dome and severely damaged the mosque. Several men, one wearing a military uniform, had earlier entered the mosque. They tied up the guards there and set explosives, which resulted in the blast. Two bombs were set off by five to seven men dressed as personnel of the Iraqi Special forces who entered the shrine during the morning.

At around 9 a.m. on 13 June 2007, suspected al-Qaeda people destroyed the two remaining 36m-high golden minarets flanking the dome's ruins. No fatalities were reported. Iraqi police have reported hearing "two nearly simultaneous explosions coming from inside the mosque compound at around 9 a.m." A report from state run Iraqia Television stated that "local officials said that two mortar rounds were fired at the two minarets."

All content from Kiddle encyclopedia articles (including the article images and facts) can be freely used under Attribution-ShareAlike license, unless stated otherwise. Cite this article:
Al-Askari mosque Facts for Kids. Kiddle Encyclopedia.