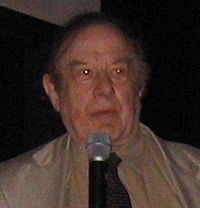 Alan Irwin Abel (August 2, 1924 – September 14, 2018) was an American prankster, hoaxer, writer, and mockumentary filmmaker. He was born in Zanesville, Ohio.

From 1966 to 1967 Abel wrote a weekly syndicated humor column "The Private World of Prof. Bunker C. Hill" that appeared in the San Francisco Chronicle and several other newspapers.

Abel died of heart failure complicated by cancer on September 14, 2018 in Southbury, Connecticut at the age of 94.

All content from Kiddle encyclopedia articles (including the article images and facts) can be freely used under Attribution-ShareAlike license, unless stated otherwise. Cite this article:
Alan Abel Facts for Kids. Kiddle Encyclopedia.