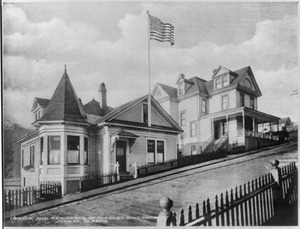 Office and residence of Alaska's governor, 1909 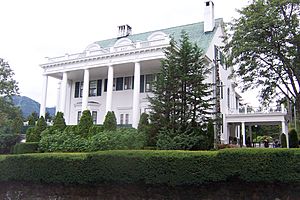 A different view of the Alaska Governor's Mansion, 2009. A totem pole is next to the building, on the right side.

The original budget for the 2½-story 12,900-square-foot (1,200 m2) frame structure and furnishing was $40,000 and included planned servants quarters and a territorial museum on the third floor which were never built.

In 1936 the wood finish of the exterior was plastered over and painted white.

In 1967-68 two guest suites and one large bedroom were added to the third floor.

In 1983 a $2.5 million renovation that restored the interior decor to its original 1912 design also included new heating, electrical, plumbing and security systems.

In its current configuration the number of rooms in the mansion, excluding great halls, garages, closets, and bathrooms, is twenty-six. There are ten bathrooms, six bedrooms, and eight fireplaces, amounting to a total area of 14,400 square feet (1,340 m2).

All content from Kiddle encyclopedia articles (including the article images and facts) can be freely used under Attribution-ShareAlike license, unless stated otherwise. Cite this article:
Alaska Governor's Mansion Facts for Kids. Kiddle Encyclopedia.