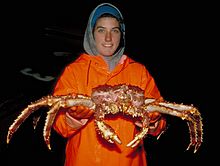 Alaskan king crab fishing is an event done in the winter in the Bering Sea near Alaska. People fish for many King Crabs. The crabbers fish from boats between 40 and 250 feet (13-75m) in length. They throw steel cages, called pots, over the side of the boat, and the crabs are lured to bait placed in them. When the pots have been on the bottom of the sea long enough they are pulled back onto the boat using a special kind of crane. The crabs in the pots are examined and crabs that are not good enough are put back into the ocean and the rest are put into a tank. When the ship gets back to the shore, the crabs are sold to stores around the world for eating.

The people working on the boat are paid a lot of money. The amount of money can be from nothing to tens of thousands of dollars depending on how many crab the fishermen caught. Alaskan crab fishing is one of the USA's most dangerous jobs. Because of the big waves and dangerous boats the fishermen work on, some people die every year.

To show people how dangerous crab fishing is, the Discovery Channel made a series called Deadliest Catch about the fishermen. And they also catch a lot of Crabs.

All content from Kiddle encyclopedia articles (including the article images and facts) can be freely used under Attribution-ShareAlike license, unless stated otherwise. Cite this article:
Alaskan king crab fishing Facts for Kids. Kiddle Encyclopedia.