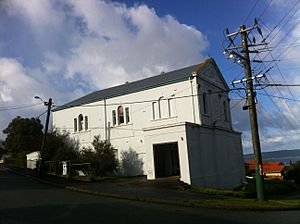 The Albany Masonic Hall, also known as Plantagenet Lodge, is a heritage listed building located at 58–60 Spencer Street, on the corner of Earl Street, on the south western slopes of Mount Clarence in Albany in the Great Southern region of Western Australia.

The Albany Lodge, the Lodge of St John, was the first Masonic lodge to erect a hall in Western Australia. It is also the only one still under the English Constitution. The land was bought in 1872 for the sum of £30. The first hall was built on the site in 1873 but was demolished in 1903 to make way for the new hall. The first hall was a tall and narrow building two storeys high. It faced on to Earl St with a door and two sash windows on the ground floor and three windows above. The first meeting was held there in 1873. The foundation stone was laid in July 1903, after the brethren met and marched from Scots Church to the site and then buried a phial containing a brief history of the lodge.

The hall is situated on a 2,266 square metres (0.23 ha) block. The building has an elevated position, has elements of a simple Federation Warehouse style, gable roof with freemason symbol on gable, arched windows on façade and emphasised piers with decorative top motifs.

All content from Kiddle encyclopedia articles (including the article images and facts) can be freely used under Attribution-ShareAlike license, unless stated otherwise. Cite this article:
Albany Masonic Hall Facts for Kids. Kiddle Encyclopedia.