He first played for the youth team of Real C.D. España in San Pedro Sula. He then moved to Olimpia, where he made his professional debut in September 2013.

Elis made his professional debut on 2 September 2013 in a Liga Nacional match against F.C. Motagua. Elis came on as substitute for Anthony Lozano to help secure a 2–1 win in the Clasico Capitalino. He scored his first professional goal on 5 August 2014 to give Olimpia a 1–0 win over Alpha United in a CONCACAF Champions League match. His first league goal came on 24 August 2014 in a 4–0 win over C.D. Marathón. Elis would score again on September 21 against C.D.S. Vida as well as score the winner in a 2–1 victory against his former team Real España on 28 September.

After 61 games and 25 goals with Olimpia, Elis joined Monterrey on 26 August 2016. He made his debut for Monterrey on 10 September 2016 in a 0–0 draw with Club Tijuana. After only 5 appearances and 0 goals or assists, Monterrey loaned Elis to MLS club Houston Dynamo for the 2017 season.

On 4 March, Elis made his debut with the Dynamo in the first game of the 2017 season; a 2–1 win over the defending champions Seattle Sounders. Elis scored his first Dynamo goal in the team's next game as they won 3–1 against the Columbus Crew. He picked up his first assist for Houston on 18 March in a 2–4 loss to Portland Timbers. On 27 September Elis scored 2 late goals to help the Dynamo overcome a 3–1 deficit. He helped the team qualify for the MLS Playoffs for the first time since 2013. In the opening game of the playoffs, Elis scored the winning goal in extra time against Sporting Kansas City. Overall, he had a strong debut season, scoring 11 goals and recording 4 assists in 30 appearances across all competitions. On 13 December, the Dynamo announced that they had acquired Elis on a full transfer from Monterrey.

Elis recorded 2 assists in the first game of the 2018 season, a 4–0 win over Atlanta United. He enjoyed a strong start to the season, scoring 8 times and assisting 5 others in the first 12 matches and being named to the MLS Team of the Week 4 times during the stretch. On 29 June 2018, Elis was named in the team to play against Juventus F.C. in the 2018 MLS All-Star Game. He came on as a halftime substitute for Carlos Vela. On 3 July picked up an assist in the 96th minute to help rescue a 2–2 draw with LAFC. Elis had 2 assists in the US Open Cup Final on 26 September as the Dynamo defeated the Philadelphia Union 3–0 to win their first ever US Open Cup. Elis finished the year with 21 combined goals and assists in MLS, a club single season record.

On 27 February 2019, Elis came on as a sub in the second leg of the Dynamo's CONCACAF Champions League tie with CD Guastatoya and assisted Mauro Manotas's goal that gave the Dynamo the lead on aggregate. On 16 March, Elis scored one and assisted on both of Memo Rodriguez's goals as the Dynamo beat the Vancouver Whitecaps 3–2. His performance saw him named to the MLS Team of the Week. In Houston's next game, Elis helped the Dynamo get off to a fast start when he set up Memo Rodriguez for a goal in the 4th minute against the Colorado Rapids. He wasn't done terrorizing the defense however as he also scored one himself and hit 2 dangerous crosses that resulted in own goals, giving the Dynamo a 4–1 win over Colorado. Elis was again named to the MLS Team of the Week. In the Dynamo's next game, Elis stayed hot, scoring on a Manotas pass to give Elis a goal in his third straight game and to help the Dynamo get a 2–1 win over the San Jose Earthquakes. On 19 April, Elis converted a penalty to score in his 4th straight game, however the Dynamo would fall to the LA Galaxy 2–1. On 27 April, Elis helped the Dynamo continue their good start to the season when he stole the ball, ran down the right wing before sending in a low cross that Manotas put into the net in the 3rd minute. Houston would go onto defeat the Columbus Crew 2–0. On 4 May, Elis helped the Dynamo defeat rivals FC Dallas in a Texas Derby match, picking up an assist in root to a 2–1 win. He made 4 appearances in the Dynamo's next 5 games, picking up 1 goal and 1 assist, before leaving to join the Honduras national team for the 2019 Gold Cup. In his first game game back with the Dynamo after the Gold Cup, Elis scored once and collected 2 assists in a 4–0 win over the New York Red Bulls. His performance saw him named to the MLS Team of the Week. On 17 July, Elis received a red card after getting in the face of a referee in the 6th minute of a match with Atlanta United. The Dynamo went on to lose the game 5–0. On top of the automatic one-game suspension, Elis was issued an additional one-game suspension by the league. Elis returned from his suspension in 1–0 loss to the Chicago Fire on 3 August, however he picked up a yellow card, meaning he was suspended for the Dynamo's next match due to yellow card accumulation. He struggled after he returned to the team, scoring once and collecting 0 assists in his next 8 matches. Elis ended the season on a strong note, scoring once and assisting 2 others in a 4–2 win over the Galaxy in the final game of the season. He was named to the Team of the Week for the 4th time of the season.

Elis missed the first 2 games of the 2020 season due to a hamstring injury he suffered during preseason. The MLS season was paused after 2 games due to the COVID-19 pandemic. MLS returned to play in July with the MLS is Back Tournament. On 13 July, Elis made his season debut in Houston's first game of the tournament, a 3–3 draw against LAFC with Elis scoring once in the match. He scored again in Houston's next game, but was also sent off for two yellow cards as Houston lost 2–1 to the Portland Timbers. On 25 August Elis had a goal and an assist in a 5–2 win over Sporting Kansas City, but was also subbed off at halftime after hurting his back. He made 2 substitute appearances in the Dynamo's next two matches, recording 2 assists in a 3–0 win over Minnesota United and scoring once in a 2–1 over Kansas City. With transfer rumors surrounding Elis, the Dynamo held him out of their next three games. He was seen at the airport in Houston on 17 September and announced his goodbyes on social media two days later.

On 21 September 2020, Elis was sold to Portuguese Primeira Liga club Boavista The terms of the transfer were undisclosed, but the fee was reportedly around $1 million plus a future sell-on percentage along with performance-based add-on incentives. Elis scored his first goal for the Portuguese outfit the following 2 November, the second goal in a 3–0 home win over Benfica. 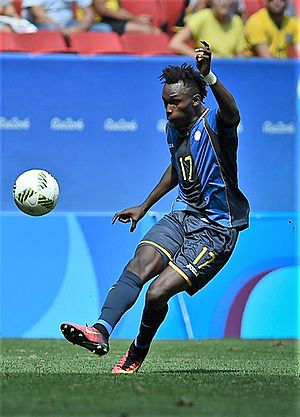 Elis playing for Honduras at the 2016 Summer Olympics

Elis first represented Honduras at the U-17 level in a 2013 CONCACAF U-17 Championship qualifying match on 7 December 2012, picking up a goal in a 5–2 win over El Salvador. In their next match, Elis scored a hat trick to help Honduras defeat Costa Rica 3–0. He finished as top scorer with four goals and help Honduras finish top of the Central American group. Elis featured in the 2013 CONCACAF U-17 Championship, where he scored once and helped Honduras finish 4th. At the 2013 FIFA U-17 World Cup Elis made four appearances and helped Honduras reach the quarter-finals.

On September 30, 2014, Elis was called up by head coach Hernán Medford to the Honduras national football team. He made his senior debut on 9 October 2014 in a friendly against Mexico, a 2–0 loss.

After making 4 senior appearances, Elis played on the Honduras U-21 team at the 2014 Central American and Caribbean Games, where he made 2 appearances as Honduras finished 4th. He was also part of the Honduras U-20 team that played at the 2015 CONCACAF U-20 Championship. Elis scored four goals in six games to help Honduras to a 3rd-place finish and qualify for the 2015 FIFA U-20 World Cup. At the U-20 World Cup, Elis appeared in all three group games, but was unable to help Honduras advance past the group stage. Elis led the Honduras U-23 team to a second-place finish at the 2015 CONCACAF Men's Olympic Qualifying Championship by scoring four goals in five games, including a brace in a 2–0 semifinals win over the United States. He was named to the Best XI of the tournament and finished as top scorer.

On 25 July 2016, Elis was named to the Honduras U-23 squad to play at the 2016 Olympics. He appeared all six of Honduras's games and scored two goals, including the winning goal in the quarterfinals match against South Korea, as he helped Honduras finish in 4th place.

On June 29, 2017, Elis was named to the 23 man squad for the 2017 Gold Cup. He made four appearances and helped Honduras reach the quarterfinals, where they fell 1–0 to Mexico.

On June 6, 2019, Fabián Coito named Elis to the 23 man squad for the 2019 Gold Cup. However, it was a disappointing tournament for Honduras and Elis, as he failed to score in his 3 appearances and Honduras finished last in their group.

On June 6, 2021, Elis scored in the third place match in the inaugural CONCACAF Nations League tournament. Elis scored what seemed to be the winner against Costa Rica in the 80th minute, but Francisco Calvo equalized for Los Ticos five minutes after. Honduras, however, defeated Costa Rica in a penalty shoot-out to secure a bronze medal.

Although born in San Pedro Sula. His older brother, Osman Elis Martínez, is a professional footballer that plays for C.D. Honduras Progreso. His father was a professional footballer; a right midfielder who played in the Honduran second division. He is of Garifuna heritage. Elis's nickname of "La Panterita", Spanish for the little panther, is in reference to a former Honduras striker David Suazo, who was known as "La Pantera" and also from San Pedro Sula. Elis is also into fashion and owns over 100 pairs of shoes. Elis has done charity work such as donating computers to his old school in Honduras.

All content from Kiddle encyclopedia articles (including the article images and facts) can be freely used under Attribution-ShareAlike license, unless stated otherwise. Cite this article:
Alberth Elis Facts for Kids. Kiddle Encyclopedia.