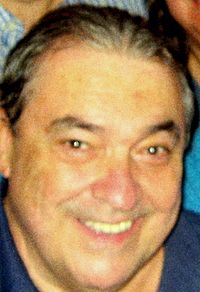 Alberto Cortez (born José Alberto García Gallo; 11 March 1940 – 4 April 2019) was an Argentine singer and songwriter. During his career, he released more than forty albums. In 1960, he famously covered the song "Sucu Sucu". He was born in Rancul, La Pampa Province.

Cortez died of a gastrointestinal hemorrhage on 4 April 2019 in Madrid, the capital city of Spain. He was 79.

All content from Kiddle encyclopedia articles (including the article images and facts) can be freely used under Attribution-ShareAlike license, unless stated otherwise. Cite this article:
Alberto Cortez Facts for Kids. Kiddle Encyclopedia.