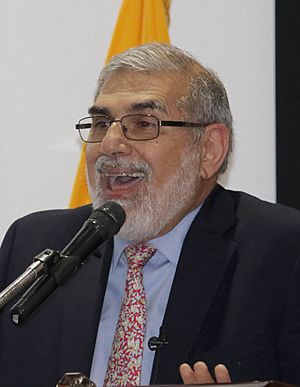 Alberto Dahik Garzozi (born August 27, 1953) is an Ecuadorian politician. He is of Lebanese ancestry. He was born in Guayaquil. Dahik was a member of the Conservative Party.

In 1995, the Supreme Court of Ecuador charged Dahik with embezzlement. However, Dahik was able to escape to Costa Rica where was given asylum. In December 2011, Dahik returned to Ecuador and was granted amnesty by President Rafael Correa, but was forced to court. In January 2012, he was acquitted of all crimes.

All content from Kiddle encyclopedia articles (including the article images and facts) can be freely used under Attribution-ShareAlike license, unless stated otherwise. Cite this article:
Alberto Dahik Facts for Kids. Kiddle Encyclopedia.