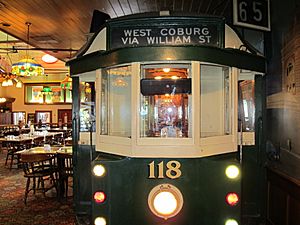 The Albion Hotel on Stirling Highway in Cottesloe, Western Australia is a historical building, trading as a hotel since 1870.

In its early years it was known as Halfway House - being located midway between Fremantle and Perth. The site was established by Thomas Briggs before 1869. The current hotel has traded under various names for over a century as a public house.

In 1864 Thomas Ernest Briggs paid 10 pounds for "Swan Location 349". It is unclear whether Briggs erected a new building or made amendments to an existing structure on the site, although many convict-era colonist writings make reference to building on the Albion site in the mid to late 1860s. Records show that Briggs applied for a publican licence in 1870 and the original inn was called Halfway House. Briggs sold the property to Robert Napoleon Bullen in 1882. Robert's name is now immortalised in the popular cafe strip Napoleon Street. Bullen had grand plans to create The Albion Pleasure Grounds but he died before his plans were realised.

In 1907 the Hotel was up for tender for purchase from Alice Bullen.

In 1912 the licence was changed from Norman Ferres to Frederick Treadgold.

The pub safe was stolen in June 1929, and in 1930, men were charged for using an adjacent vacant block as a betting place.

In 2016, a fire in the roof-space caused $10,000 worth of damage, but the building was saved from destruction.

All content from Kiddle encyclopedia articles (including the article images and facts) can be freely used under Attribution-ShareAlike license, unless stated otherwise. Cite this article:
Albion Hotel, Cottesloe Facts for Kids. Kiddle Encyclopedia.