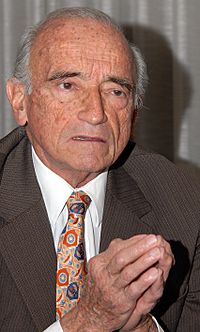 Aldo Ferrer (April 15, 1927 – March 8, 2016) was an Argentine economist and policy maker. Ferrer was one of the leading figures of economic nationalism in Argentina. He served as Minister of Economy from 1970 through 1971. He later served as an ambassador to France from Argentine. He served as ambassador from 2011 through 2013. He was born in Buenos Aires.

All content from Kiddle encyclopedia articles (including the article images and facts) can be freely used under Attribution-ShareAlike license, unless stated otherwise. Cite this article:
Aldo Ferrer Facts for Kids. Kiddle Encyclopedia.