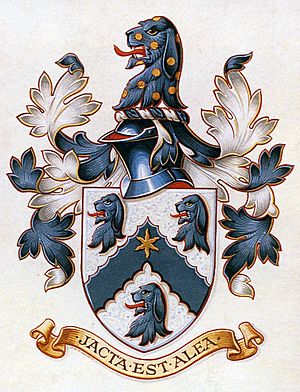 The motto of the Hall family from Shackerstone says jacta est alea.

Alea iacta est is a Latin phrase that means "the die has been cast (thrown)". Suetonius credits Julius Caesar as having said it on January 10, 49 B.C when he led his army across the Rubicon river in Northern Italy. It means things have happened that can't be changed back.

The phrase, either in Latin or in translation, is used in many different languages.

All content from Kiddle encyclopedia articles (including the article images and facts) can be freely used under Attribution-ShareAlike license, unless stated otherwise. Cite this article:
Alea iacta est Facts for Kids. Kiddle Encyclopedia.