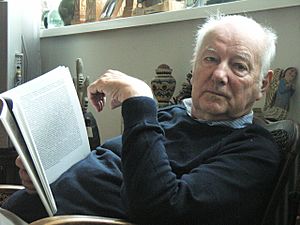 Aleksander Jackowski (19 January 1920 – 1 January 2017) was a Polish cultural anthropologist, ethnographer, and art critic. He worked at the University of Warsaw until his death in 2017.

Jackowski was born in Warsaw, Poland. During World War II, Jackowski was sent by the Soviet government to serve with the General Berling Army in Serbia. He returned to Warsaw in 1945 after the war ended. He graduated from a university in Warsaw.

Until 1948, he worked in the Ministry of Foreign Affairs, as the director of the Minister’s Cabinet managing the Press and Information Department. In 1948, he became the deputy editor in chief of the weekly “Odrodzenie” (Renascence). From the end of 1949, he was the Deputy Director and Head of the Department of Folk and Naïve Art at the Art Institute in the Polish Academy of Sciences.

In his later years, he worked as a professor and anthropology expert at the University of Warsaw until his death.

All content from Kiddle encyclopedia articles (including the article images and facts) can be freely used under Attribution-ShareAlike license, unless stated otherwise. Cite this article:
Aleksander Jackowski Facts for Kids. Kiddle Encyclopedia.