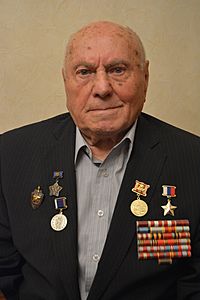 Aleksey Nikolayevich Botyan (Russian: Алексей Николаевич Ботян; 10 February 1917 – 13 February 2020) was a Soviet-Russian spy and intelligence officer. He was awarded the title of Hero of the Russian Federation in 2007 for his role in protecting the Polish city of Kraków from destruction by the Nazis in January 1945.

All content from Kiddle encyclopedia articles (including the article images and facts) can be freely used under Attribution-ShareAlike license, unless stated otherwise. Cite this article:
Aleksey Botyan Facts for Kids. Kiddle Encyclopedia.