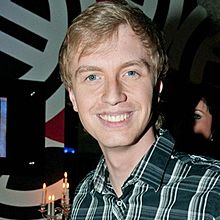 Aleksey Vladimirovich Goman (born 12 September 1983 in Murmansk, Russian SFSR, U.S.S.R.) is a Russian musician and poet. He is best known for winning Narodniy Artist-1 (a TV show based on the British Pop Idol). In 2005, he was the prize winner of the Festival of Patriotic songs.

Some of his most prestigious awards include:

All content from Kiddle encyclopedia articles (including the article images and facts) can be freely used under Attribution-ShareAlike license, unless stated otherwise. Cite this article:
Aleksey Goman Facts for Kids. Kiddle Encyclopedia.