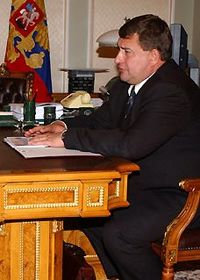 Aleksey Ivanovich Lebed (Russian: Алексей Иванович Лебедь; 14 April 1955 – 27 April 2019) was a Russian military officer and politician. He was a member of United Russia. He served as the Head of the Republic of Khakassia from 1997 to 2009. He was born in Novocherkassk.

All content from Kiddle encyclopedia articles (including the article images and facts) can be freely used under Attribution-ShareAlike license, unless stated otherwise. Cite this article:
Aleksey Lebed Facts for Kids. Kiddle Encyclopedia.