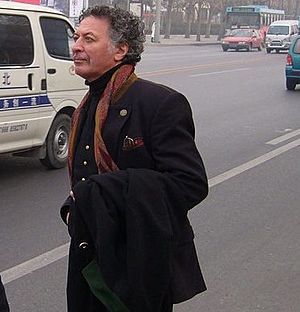 Alessandro Kokocinski (born Alejandro Kokocinski; 3 April 1948 – 12 December 2017) was an Italian-Argentine painter, sculptor and set designer, of Polish-Russian origin. He was born in the refugee camp at Porto Recanati, Italy. His family survived the Holocaust. He was raised in Buenos Aires.

Kokocinski worked on the Salvador Allende government’s agrarian reform, in partnership with the Catholic University of Santiago de Chile. He settled in Rome and became a pupil of Riccardo Tomassi Ferroni, with whom he shared a studio in Trastevere, together with Carlo Quattrucci.

In 2016, Kokocinski created the set design and lighting design for “Lina Sastri è il mio nome”, a musical theatrical show which opened on 4 October 2016 at the Teatro Quirino, Rome.

Kokocinski died on 12 December 2017 in Tuscania, Italy of lymphoma at the age of 69.

All content from Kiddle encyclopedia articles (including the article images and facts) can be freely used under Attribution-ShareAlike license, unless stated otherwise. Cite this article:
Alessandro Kokocinski Facts for Kids. Kiddle Encyclopedia.