Aleksandr Ivanovich Kazarsky (Russian: Алекса́ндр Ива́нович Каза́рский) (June 16, 1797 – June 16, 1833) was a Russian Navy officer. He was the hero of the Russo-Turkish War (1828–1829). Kazarsky was the captain of brig Mercury. He became famous after the victory in the battle against two Turkish ships of the line. 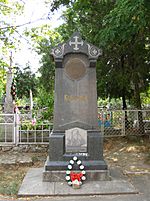 A brig and a torpedo boat were named after Alexander Kazarsky.

All content from Kiddle encyclopedia articles (including the article images and facts) can be freely used under Attribution-ShareAlike license, unless stated otherwise. Cite this article:
Alexander Kazarsky Facts for Kids. Kiddle Encyclopedia.