Alexander Majors (October 4, 1814 – January 13, 1900) was an American businessman, who along with William Hepburn Russell and William B. Waddell founded the Pony Express, based in St. Joseph, Missouri.

In about 1860, their freight firm, now known as "Russell, Majors and Waddell," formed the "Central Overland California and Pikes Peak Express Company" to get the federal contract to deliver mail between Missouri and California. It had previously been held by Butterfield Overland Mail, which delivered the mail in 25 days or more over a route that went through the South. With sectional tensions on the rise, Majors and his colleagues proposed to deliver the mail over a central route through Salt Lake City, Utah and proposed doing it in 10 days via a horse relay called the Pony Express.

Even though they succeeded in making the deliveries, they did not get the contract. They went bankrupt after the Transcontinental Telegraph opened in October 1861, as its competition eliminated the need for some mail service.

He provided rail ties for the crews of the Union Pacific Railroad working on the First Transcontinental Railroad. After the railroad was completed, he continued to haul freight to towns not yet served by the railroad.

Alexander Majors was born October 4 in the year 1814, in Franklin, Kentucky. 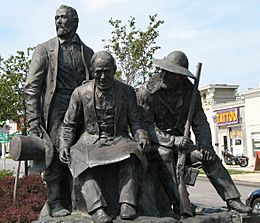 In 1848 Alexander Majors started hauling overland freight on the Santa Fe Trail. On his first trip, he set a new time record of 92 days for the 1564-mile (2500 km) round trip. Eventually he employed 4,000 men, including a 15-year-old lad named Billy Cody, later known as Buffalo Bill. Cody became one of his most famous Pony Express riders.

in 1853 Alexander Majors was awarded contracts to haul supplies to United States Army posts along the Santa Fe Trail.

Alexander Majors helped establish the Kansas City stockyards, which became a center of shipping beef to the East Coast and Midwest.

In 1854 he teamed up with William B. Waddell and William Hepburn Russell. Majors was responsible for the freighting part of the business, Waddell was to manage the office, and Russell was to use his Washington DC contacts to acquire new contracts. Waddell chose be a silent partner, so the firm was initially called "Majors and Russell". In the 1850s their firm Russell, Majors and Waddell and the short-lived Pony Express were major businesses, contributing to the growth of Kansas City.

Majors' Overland Stage Company was part of a wide network that reached into the frontier West. Fifteen years later, it was all over.

On the Missouri side of State Line at 81st Street, Majors built his two-story frame farmhouse in 1855. (His house is now operated as a museum.) There, wagon trains loaded with goods from his warehouse down on the river headed west. In Westport, Majors operated a meat-packing plant. It supplied the trains with cured pork, soap and candles. For 15 years Majors and his far-flung interests were highly successful.

In 1860 his Pony Express began. But by then, technology was already threatening. Telegraphs and railroads were a reality. The telegraph spelled doom for Pony Express, and the "great iron horse" killed Majors' freighting and stage coach operations in time.

By 1865 Majors sold out what little remained and moved to Colorado. There, 30 years later, his former young wagonmaster and Pony Express rider, William F. "Buffalo Bill" Cody, found him. He was old, ill and penniless. Cody helped him, taking Majors on as part of the Cody Wild West show. Alexander Majors lived at Cody's Scouts' Rest Ranch in North Platte, Nebraska for a time.

Majors died in Chicago, Cook County, Illinois, on January 13, 1900, aged 85, and is buried in Union Cemetery in Kansas City, MO.

All content from Kiddle encyclopedia articles (including the article images and facts) can be freely used under Attribution-ShareAlike license, unless stated otherwise. Cite this article:
Alexander Majors Facts for Kids. Kiddle Encyclopedia.