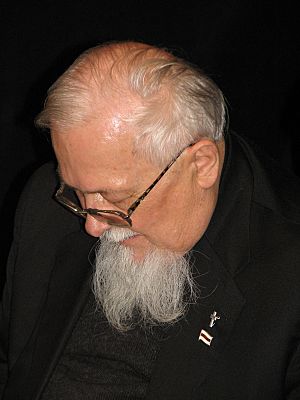 Alexander Nadson (Belarusian: Аляксандар Надсан; 8 August 1926 – 15 April 2015) was a Belarusian émigré social and religious leader. He was the Apostolic Visitor for Belarusian Greek Catholic faithfuls abroad from 1986 until his death. He became a priest in 1958 and worked in the United Kingdom for most of his life.

Nadson was born in the town of Haradzeya, Nesvizh Raion of the Minsk Oblast.

All content from Kiddle encyclopedia articles (including the article images and facts) can be freely used under Attribution-ShareAlike license, unless stated otherwise. Cite this article:
Alexander Nadson Facts for Kids. Kiddle Encyclopedia.