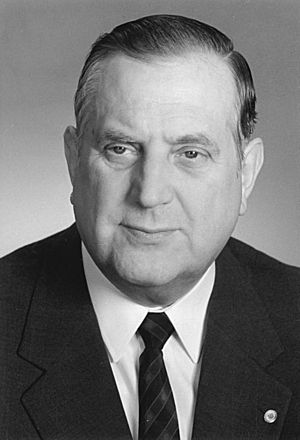 Alexander Schalck-Golodkowski (July 3, 1932 – June 21, 2015) was a East German politician and trader. He was born in Berlin. He was director of a main department ('Hauptverwaltungsleiter') in the Ministry for Foreign Trade and German Domestic Trade (1956–62), the Deputy Minister for External Trade (1967–75), and head of the GDR's Kommerzielle Koordinierung (KoKo, 1966–86). He was also a Stasi colonel.

All content from Kiddle encyclopedia articles (including the article images and facts) can be freely used under Attribution-ShareAlike license, unless stated otherwise. Cite this article:
Alexander Schalck-Golodkowski Facts for Kids. Kiddle Encyclopedia.