Alexander Gennadiyevich Zaitsev (Russian: Александр Геннадиевич Зайцев, born 16 June 1952 in Leningrad) is a retired pair skater who represented the Soviet Union. With partner Irina Rodnina, he is a two-time (1976, 1980) Olympic champion, six-time World champion and seven-time European champion. From 1973 to 1980 they won every event they entered. They were coached by Stanislav Zhuk and later Tatiana Tarasova in Moscow.

In April 1972, Zaitsev was recommended by Stanislav Zhuk to Irina Rodnina as a potential partner. She was already a four-time World champion and 1972 Olympic gold medalist with her previous partner Alexei Ulanov, who had left her to skate with Lyudmila Smirnova. Zaitsev was three years younger than Rodnina and was much less seasoned but learned quickly. He was from Leningrad (Saint Petersburg) while she was from Moscow.

Rodnina / Zaitsev's music stopped during their short program at the 1973 World Championships, possibly due to a Czech worker acting in retaliation for the suppression of the Prague Spring. Known for intense concentration, they finished the program in silence, earning a standing ovation and a gold medal upon completion, ahead of Smirnova / Ulanov, whom they again defeated in 1974.

In 1974, Rodnina / Zaitsev left Zhuk, with whom the working relationship had become strained, to train with Tatiana Tarasova. They won six consecutive World titles together, as well as seven European gold medals, and won their first Olympic title together in 1976. Rodnina / Zaitsev did not compete during the 1978–79 season because she was pregnant with their son, also named Alexander, who was born on February 23, 1979. They returned in 1980 to capture their second Olympic title together and Rodnina's third. They then retired from competitive skating.

After retiring from competition, Zaitsev became a coach and for a time was involved in the administration of the sport.

Rodnina and Zaitsev were married in April 1975. Their son, also named Alexander Zaitsev, was born in 1979. The pair later divorced. 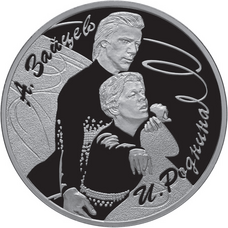 All content from Kiddle encyclopedia articles (including the article images and facts) can be freely used under Attribution-ShareAlike license, unless stated otherwise. Cite this article:
Alexander Zaitsev (pair skater) Facts for Kids. Kiddle Encyclopedia.