Kids Encyclopedia Facts
This page is about the river in Alberta. For the village in the Andaman and Nicobar Islands, see Alexandera River. 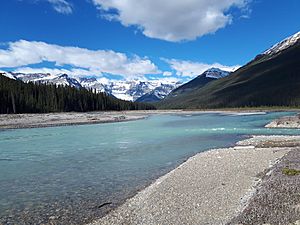 The Alexandra River is a tributary of the North Saskatchewan River in Banff National Park, Alberta, Canada. Its source is an unnamed lake at 1,563 metres (5,128 ft) of elevation, which is fed by the Alexandra Glaciers. From there it flows for about 20 kilometres (12 mi) through a remote valley until it reaches its mouth at the North Saskatchewan River. There are no navigable roads in the river's valley, but a decommissioned hiking trail does follow the north bank upstream until the river's confluence with the Castleguard River. The trail eventually reaches the Castleguard Meadows, a revered but seldom-visited hiking destination. The river offers good paddling opportunities to backcountry adventurers who use a packraft.

Other major tributaries of the river include Ridges Creek, Terrace Creek, and Amery Creek. 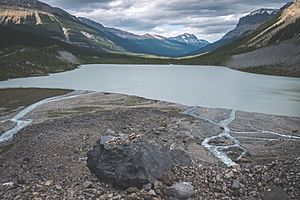 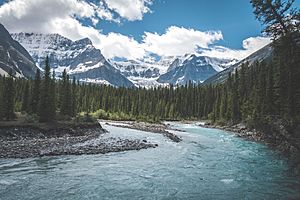 All content from Kiddle encyclopedia articles (including the article images and facts) can be freely used under Attribution-ShareAlike license, unless stated otherwise. Cite this article:
Alexandra River (Alberta) Facts for Kids. Kiddle Encyclopedia.