Alice in Wonderland is a musical by Henry Savile Clarke (book and lyrics), Walter Slaughter (music) and Aubrey Hopwood (lyrics), based on Lewis Carroll's books Alice's Adventures in Wonderland (1865) and Through the Looking-Glass (1871). The piece, billed as "A musical dream play in two acts", achieved considerable popularity. At Carroll's request, Slaughter retained the old tunes in the parodies such as "Bonny Dundee".

There were several amateur productions of Alice after the book's publication, and Carroll himself considered dramatizing the story for the professional stage. In 1877 he wrote to Arthur Sullivan (of Gilbert and Sullivan) in an attempt to persuade him to write the songs for a musical production. Sullivan was interested in the idea and proposed that he would compose a score to Carroll's libretto. Carroll hesitated, partly at the high fee Sullivan suggested for his work. Wanting to know what he would get for his money, Carroll suggested that Sullivan first score a song or two. After this the proposed collaboration fizzled out. 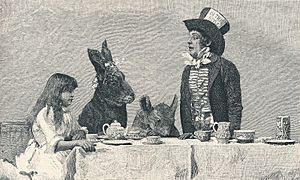 Phoebe Carlo as Alice, Edgar Norton as Hare, Dorothy D'Alcourt as Dormouse and Sydney Harcourt as Hatter in the original production (1886)

In August 1886 the dramatist and critic Henry Savile Clarke wrote to Carroll asking to adapt Alice in Wonderland for the stage. Carroll gave permission but with several stipulations:

There are one or two wishes on the subject, which I will name for your consideration: but the only essential consideration is that I should have your written guarantee that, neither in the libretto nor in any of the stage business, should any coarseness, or anything suggestive of coarseness, be admitted. ... This piece ought to be an Operetta (like The Mikado) and not a Pantomime.

Carroll was involved completely in the production from beginning to end, offering advice on everything from the adaptation of the novel to choosing the cast. He chose the child actress Phoebe Carlo for the title role, bought her costumes at his own expense and sent her to the actress Kate Terry for lessons in elocution. Dorothy D'Alcourt, who played the Dormouse, was aged 6+1⁄2.

The production opened on 23 December 1886 at the Prince of Wales Theatre in London. The Theatre described the piece as a pantomime but wrote in its review, "Alice in Wonderland will not appeal to the children alone. ... Mr. Savile Clarke has done wonders. ... The play is beautifully mounted, and splendidly acted, Miss Phœbe Carlo being very successful as the little heroine... she played in a delightful and thoroughly artistic fashion, and in this respect she was closely followed by a tiny mite, Miss Dorothy D'Alcort, who plays first the Dormouse. ... Mr. Edgar Bruce, Mr. Walter Slaughter (who has written some charming music for the piece), and Mr. Savile Clarke, all deserve unstinted praise." The piece was frequently revived over the next four decades. 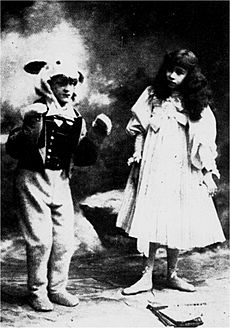 Act I, "Alice's Adventures in Wonderland", is in two scenes: "A Forest in Autumn" and "A Glade in Wonderland". Act II, "Through the Looking Glass", consists of four scenes: "Through the Looking Glass"; "The Garden of Live Flowers"; "A Sea-Shore"; and "The Banqueting Hall – The Forest Again." A review in The Theatre summarised the story as follows:

The story runs glibly, opening with a chorus of fairies surrounding Alice asleep in a chair beneath a tree, from there we progress splendidly, making a new acquaintance with all our old friends, the White Rabbit, the Caterpillar, the duchess with her Baby, the Cook with her reckless use of pepper, the Cheshire Cat with his remarkable smile, the Hatter, the Hare, and the Dormouse, who have their perpetual tea party, and treat Alice to conundrums and unconventional rudeness. Then comes a long and brilliant procession, which should fill Alice's heart with awe, if not with admiration, but our heroine is nothing daunted by this large crowd. "Why, they're only a pack of cards," she says, "I needn't be afraid of them?" and so she answers the sanguinary-minded queen of Hearts, in a reckless manner, and refuses to see heads knocked off in such profusion. She then dances with the Cards in a graceful gavotte, and afterwards protects her old friend, the Cheshire Cat, from an undeserved execution. The Gryphon and Mock Turtle then appear, and Alice receives some hints as to a sea education, and the first act of the dream play for children ends with the trial of the Knave of Hearts for eating the tarts, in which Alice's verdict of acquittal is unanimously passed.

In the second act, Mr. Savile Clarke takes us to another book, Through the Looking-Glass, and Alice is introduced to the chessmen and Chorus, who dance stiffly for her delectation, then the Red Queen gives her some advice after she has spoken to the live flowers, and Tweedledum and Tweedledee appear. She soon makes friends with these massive twins, and pleads hard when they determine to have a mortal combat, but all to no purpose, and so after she has witnessed the greedy Carpenter and Walrus devour their daily portion of oysters, she assists in arming Tweedledum and Tweedledee for the fray. The arrival of a Crow sends the warriors to speedy flight, and Humpty Dumpty appears on his wall, and so the play goes on until we see Alice once more asleep in her chair, and hear her wake to say, "Oh! I've had such a curious dream!" 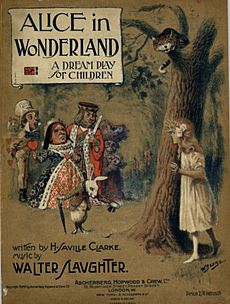 Act I – In Wonderland

Act II – Through the Looking-Glass 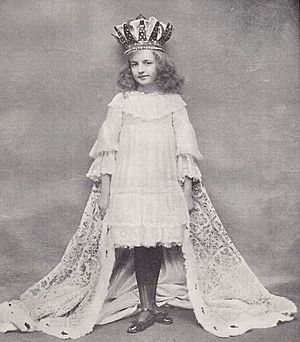 Adult actors who appeared along with the mainly juvenile casts included Irene Vanbrugh as the Knave of Hearts (1888); Ellaline Terriss as Alice and Seymour Hicks as the Hatter (1900); Marie Studholme as Alice, Alice Barth as the Duchess and the Red Queen, Stanley Brett as the Mad Hatter and J. C. Buckstone as Tweedledee at the Prince of Wales's Theatre (1906); Dan Leno (1909, in a production conducted by Marjory Slaughter, the composer's daughter); and C. Hayden Coffin as the Hatter (1913 and 1921).

All content from Kiddle encyclopedia articles (including the article images and facts) can be freely used under Attribution-ShareAlike license, unless stated otherwise. Cite this article:
Alice in Wonderland (musical) Facts for Kids. Kiddle Encyclopedia.