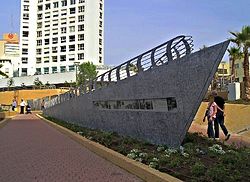 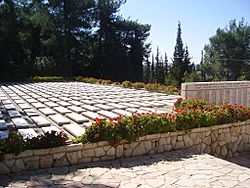 Aliyah Bet (Hebrew: 'עלייה ב, Aliyah bet) is the name of the illegal immigration to by Jews to the British Mandate of Palestine between 1934 and 1948. It is also known as Ha'apala (Hebrew: ההעפלה, meaning ascension) in Hebrew. Over 100,000 people tried to illegally enter Palestine. There were 142 voyages by 120 ships. Over half were stopped by the British patrols. Over 1,600 drowned at sea. Only a few thousand actually entered Palestine.

All content from Kiddle encyclopedia articles (including the article images and facts) can be freely used under Attribution-ShareAlike license, unless stated otherwise. Cite this article:
Aliyah Bet Facts for Kids. Kiddle Encyclopedia.