All Saints' Church is a Church of England church in Chalbury, Dorset, England. It has 13th-century origins, with later alterations and additions, and many 18th-century furnishings. The church is a Grade I listed building. In the churchyard, an early 19th-century table tomb of the Long family is Grade II listed. 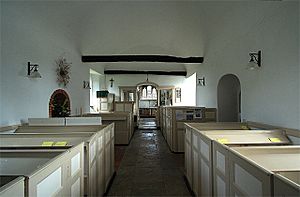 The interior of All Saints' Church.

All Saints' Church has been dated to the 13th-century, with the nave and chancel dating to this period. During the 16th-century, the nave's north wall was rebuilt and extensive repairs were made to the church in 1702. Further repairs and additions were made over the course of the 18th-century, including the construction of the north vestry and south porch. The church was also refitted during the 18th-century and retains much of its furnishing from that time.

A new organ was opened at the church on 5 July 1878. It was paid for by subscriptions from the patron, Lord Pembroke, the landowners, Lord Shaftesbury and Lord Alington, the Rector, Rev. George Henry Billington, and a number of other principal parishioners and supporters, including Lady Edith Ashley, Lady Charlotte Lyster, Lord Ashley, Mr. R. C. L. Bevan, Mr. A. Girdwood, Mr. Robert Cooke and Mr. W. F. Burnley. It was built by Messrs Bryceson Brothers and Ellis of London.

The churchyard was extended in c. 1892. In c. 1957, church repairs were carried out to the plans of William Henry Randoll Blacking of Salisbury. The Incorporated Church Building Society provided a grant towards the work. Today the church holds a Communion service every fifth Sunday of the month, in addition to other special services.

All Saints' is built of flint and rubble, with ashlar dressings. The roofs are largely covered in tiles, with some use of stone slate. Much of the church's exterior is now rendered and whitewashed, while parts have been refaced in brick. The church is made up of a nave, chancel, north vestry and south porch. The west gable has a roofed bell-cot containing a single bell, cast by R. Wells and dating to the 18th-century.

In the chancel, there are floor slabs to Henry Dalicourt, dated 1708, and his daughter, Lucy Duke, dated 1774. In the nave is a floor slab to Alexander Arney, dated 1669.

All content from Kiddle encyclopedia articles (including the article images and facts) can be freely used under Attribution-ShareAlike license, unless stated otherwise. Cite this article:
All Saints' Church, Chalbury Facts for Kids. Kiddle Encyclopedia.