All Saints' Church, Ockbrook, is a parish church in the Church of England located in Ockbrook, Derbyshire.

Before the English Reformation, Ockbrook was a chapelry within the parish of Elvaston, cared for by a curate. Tithes of the benefice were paid to the monks at Shelford Priory.

At the Dissolution of the Monasteries, the Stanhope family took up residence at Elvaston and became patrons of the church. In the mid-16th century, Ockbrook became a parish in its own right.

The tower is the oldest part of the church, dating from the 12th century, with 4 ft thick walls. The font is also Norman and was rescued and reinstalled in 1963 after 150 years outside in the vicarage garden.

The oak chancel screen dates from 1520, and was relocated from St Ursula’s Chapel, Wigston Hospital (or Wyggeston Hospital) Leicester in 1810, following the rebuilding of the chancel. The choir stalls were also installed at this time, and may originate from the same source.

The Pares family of Hopwell took over as patrons in the late 18th century and remain so to this day.

The building has had many changes and enlargements over the centuries which is evident in the overall appearance. The chancel was rebuilt by Thomas Pares in 1803. He added the Pares vault to the north of the chancel. The north aisle was built in 1814. The south aisle was added in 1835 at a cost of about £700 (equivalent to £57,980 in 2021), with the gallery at the west end. In the 1890s new pinewood pews replaced the old box pews. The tower was restored in 1890 and 1927. 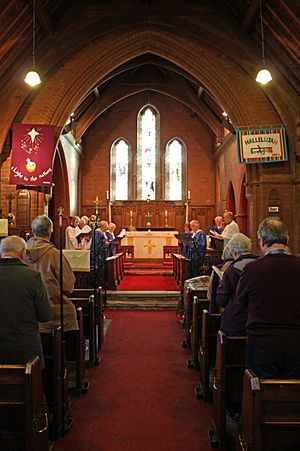 All Saints' Church is part of a joint parish with St Stephen's Church, Borrowash.

There are several monuments to the Pares family of Hopwell Hall. There are monuments by Sir Richard Westmacott dating from 1805, 1823 (Mary Pares), and 1824 (Thomas Pares).

An organ may have been installed at the time of the restoration and rebuilding of the church in 1835. Work on the organ was carried out in the 1900s by J.H. Adkins and in 1960 and 1998 by Henry Groves of Nottingham. A specification of the organ can be found on the National Pipe Organ Register.

All content from Kiddle encyclopedia articles (including the article images and facts) can be freely used under Attribution-ShareAlike license, unless stated otherwise. Cite this article:
All Saints' Church, Ockbrook Facts for Kids. Kiddle Encyclopedia.