All Saints Church is a Roman Catholic Parish church in Oxted, Surrey. Building work on the church started in 1913 and was delayed by World War I. Aspects of the church interior were designed by Geoffrey Webb. It is situated off Chichele Road north of the town centre, to the west of Oxted School. It is a Grade II listed building.

In 1914, Fr Algernon Lang came to Oxted and sought a suitable location for a church for the local Catholic population. He bought a house at 12 Chichele Road and decided to build the church on the land directly behind the house. The house itself was built in 1913 from materials gathered from a demolished house in Godstone. The foundation stone of the church was laid on 3 August 1914, the day before the start of World War I.

Work continued until December 1914. By that time, the sacristy, crypt and chancel were completed. Work recommenced after the war ended. The exterior walls of the church were completed on 7 December 1920. The sanctuary and nave were design by James Leonard Williams. He also designed St George's Church in Sudbury, and died in 1926, before both St George Church and All Saints Church were completed.

Interior construction continued until 6 July 1927 when the church was consecrated. The rood screen was designed by Williams. The ceiling, organ gallery and reredos were designed by Geoffrey Webb. The reredos is a painted copy of the Coronation of the Virgin by Fra Angelico, it was designed by Webb and built by Robert Bridgeman of Lichfield.

In 2001, the west side of the church was extended. The architect was Deirdre Waddington, who also designed the 2008–2009 renovation of the Friary Church of St Francis and St Anthony in Crawley. 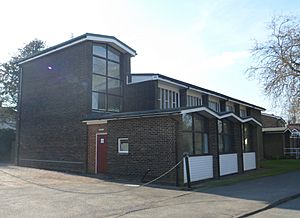 Since 2006, St Ambrose Church in Warlingham has been part of the same parish. It was built from 18 July 1957 to 1958. Before that, Mass was held in an extended building in a house's garden.

All content from Kiddle encyclopedia articles (including the article images and facts) can be freely used under Attribution-ShareAlike license, unless stated otherwise. Cite this article:
All Saints Church, Oxted Facts for Kids. Kiddle Encyclopedia.