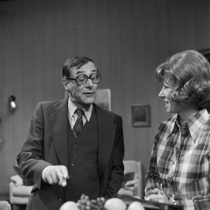 Allard van der Scheer was born on 21 August 1928 in The Hague, Netherlands. His daughter was also an actress. Scheer died on 9 January 2014 in Muiderberg, North Holland. He died from lung cancer. He was aged 85.

All content from Kiddle encyclopedia articles (including the article images and facts) can be freely used under Attribution-ShareAlike license, unless stated otherwise. Cite this article:
Allard van der Scheer Facts for Kids. Kiddle Encyclopedia.