The Allentown Bridge is a bridge spanning the Puerco River near Houck, Arizona, located in Apache County. The existing structure was completed in 1923 and is listed on the National Register of Historic Places.

In 1922, a major upgrading of the highway between Adamana and the Arizona state line with New Mexico. As part of this upgrade, bridges were proposed to cross the Puerco River, near the Indian settlements of Allentown and Sanders, as well as a smaller structure over the Lupton Arroyo near Lupton. Without the bridges over the Puerco, vehicles had to wait for waters to subside to a point where they could ford the river. The wait could reach up to 24 hours.

AHD engineered a design for the structures, the design for the bridge near Allentown called for a medium-span deck truss with twenty-foot cantilevered ends. On January 1, 1923 AHD announced bids for all three structures. A Denver construction company, the Midland Bridge Company, was awarded the contract for the Allentown bridge. At a total cost of $11,675, funding was supplied from an Apache County bond issue as well as money from the state road fund. Construction began on January 17 and was completed on July 11. After completion, this stretch of highway would become part of the road later designated U.S. Highway 66.

Due to a realignment of U.S. 66 in 1931, the Allentown bridge, along with the Sanders bridge, were no longer on the route. Today the bridge only carries local traffic on the Navajo Nation. 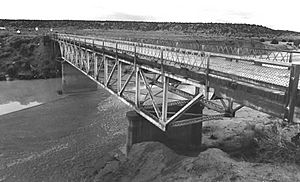 The substructure of the bridge consists of concrete abutments and solid concrete piers, while the superstructure is made of a riveted steel 9-panel Pratt deck truss, with both its ends cantilevered. There are steel lattice guardrails, with timber stringer/pile approach spans on both sides. It is a single span of 90 feet in length and 15.2 feet in width, with a total length of 206 feet. On September 30, 1988, the bridge was listed on the National Register of Historic Places. It is one of the earliest bridges with a deck truss design which was built by the State Engineer and, with the Little Hell Canyon Bridge, is one of the two earliest deck truss bridges in the state. The cantilevered ends are unique in Arizona among trusses built for vehicular process.

All content from Kiddle encyclopedia articles (including the article images and facts) can be freely used under Attribution-ShareAlike license, unless stated otherwise. Cite this article:
Allentown Bridge Facts for Kids. Kiddle Encyclopedia.