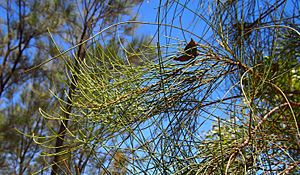 Allocasuarina luehmannii (buloke or bull-oak) is a species of ironwood tree native to Australia and its wood is the hardest commercially available.

The evergreen tree typically grows to a height of 10 to 20 metres (33 to 66 ft) and usually produces a clear trunk. It is moderately to long-lived, usually over 15 years with a moderate growth rate. It is dioecious with male and female flowers on separate plants, which flowers in spring.

"Australian buloke is commonly reported as the hardest wood in the world. This is based upon a single data source and may not give the best representation of all testing and data available. Consequently, with as many data points taken into consideration as possible, Australian buloke ranks at #21 overall on the poster Worldwide Woods, Ranked by Hardness. For more information, please consult the video discussion, Quest for the Hardest Wood in the World."

The cladodes are 8 to 22 millimetres (0.31 to 0.87 in) long with 10 to 14 teeth. They are sometimes waxy, of slightly greater diameter near their apex than their base.

The species occurs across a vast region of eastern and southern Australia, mainly north and west of the Great Dividing Range, within the Murray-Darling Basin, and within the states of New South Wales, South Australia and Victoria. Its extent of occurrence has been greatly depleted by clearing for cereal cropping and pasture development. It is an important food resource for the endangered southeastern subspecies of the red-tailed black cockatoo in the Wimmera region of western Victoria, where some remnant stands are threatened by farming practices It grows on a range of soil types, mainly sandy loams, and is usually found on lower parts of the landscape. It tolerates acid, alkaline and moderately saline soils.

The Shire of Buloke in Victoria, Australia is named after this tree species.

The species was first formally described as Casuarina luehmannii in 1900 by the botanist Richard Thomas Baker in the paper On two new species of Casuarina in the Proceedings of the Linnean Society of New South Wales. It was subsequently reclassified in the Allocasuarina genus by Lawrence Alexander Sidney Johnson in 1985 in the Journal of the Adelaide Botanic Gardens.

All content from Kiddle encyclopedia articles (including the article images and facts) can be freely used under Attribution-ShareAlike license, unless stated otherwise. Cite this article:
Allocasuarina luehmannii Facts for Kids. Kiddle Encyclopedia.