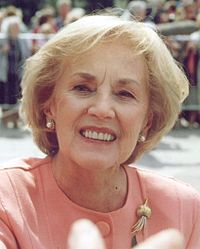 Alma Adamkienė (née Nutautaitė; February 10, 1928) is a Lithuanian-American philologist, philanthropist and public servant. She was born in Šiauliai, Lithuania. She is the wife of the former President of Lithuania, Valdas Adamkus since being married in 1951.

Adamkienė was First Lady during his two terms (1998–2003 and 2004–2009). She also holds United States citizenship. She immigrated to the United States in 1949. She first worked as a laboratory assistant at a steel factory. Later, she took a position with an insurance company. She also organized and participated in Lithuanian émigré activities.

During the presidential election held in Lithuania in 1997, her husband Valdas Adamkus campaigned for the Presidency and won. After Adamkus became President, Adamkienė became involved in many Lithuanian social programs focusing on the welfare of children.

All content from Kiddle encyclopedia articles (including the article images and facts) can be freely used under Attribution-ShareAlike license, unless stated otherwise. Cite this article:
Alma Adamkienė Facts for Kids. Kiddle Encyclopedia.