Aloha ( not) is a census-designated place and unincorporated community in Washington County, Oregon, United States. By road it is 10.9 miles (17.5 km) west of downtown Portland. As of the 2010 Census, the population was 49,425. Fire protection and EMS services are provided through Tualatin Valley Fire and Rescue.

On January 9, 1912, the community received its name with the opening of a post office named Aloha; the area had previously been known as Wheeler Crossing. According to Oregon Geographic Names, the origin of the name Aloha is disputed. Some sources say it was named by Robert Caples, a railroad worker, but it is unknown why the name was chosen. In 1983 Joseph H. Buck claimed that his uncle, the first postmaster, Julius Buck, named the office "Aloah" after a small resort on Lake Winnebago in Wisconsin. Supposedly the last two letters were transposed by the Post Office during the application process. The local pronunciation, however, has remained Ah-LO-wa rather than Ah-LO-ha.

The community attempted to incorporate in 1984, but the regional boundary commission halted the effort after determining the community could not provide the needed municipal services of a city.

In 2012, a public library was opened in space within a strip mall shopping center on Farmington Road at Kinnaman Road (anchored by Bales Thriftway). Named the Aloha Community Library, it was established by the non-profit Aloha Community Library Association and is staffed by volunteers. At the time of its opening, it had about 4,500 books.

According to the United States Census Bureau, the CDP has a total area of 7.4 square miles (19 km2), all land. 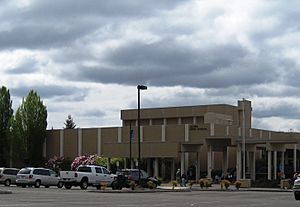 All content from Kiddle encyclopedia articles (including the article images and facts) can be freely used under Attribution-ShareAlike license, unless stated otherwise. Cite this article:
Aloha, Oregon Facts for Kids. Kiddle Encyclopedia.