Baldness (also known as alopecia) is when someone has no hair on his or her head. Sometimes this is inherited from parents or grandparents, or it can be done on purpose if somebody cuts off all their hair off. Some monks or South Korean soldiers in the army do this.

Baldness is most often caused by a medical condition known as androgenic alopecia. This is found in humans, as well as in some animals. When it occurs, it will mean that those affected will permanently lose some (or all) of their hair. Since some of the factors are linked to the genes on the chromosome, the condition can be seen more often with men, than with women. 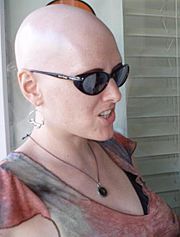 Alopecia totalis is the loss of all head hair. Its cause is believed to be autoimmune, but many with the disorder lead relatively low stress lives.

Alopecia areata (AA) is a condition in which hair is lost from some or all areas of the body, usually from the scalp.[1][2] Because it causes bald spots on the scalp, especially in the first stages, it is sometimes called spot baldness. Bergin and Eddies = boldy.

All content from Kiddle encyclopedia articles (including the article images and facts) can be freely used under Attribution-ShareAlike license, unless stated otherwise. Cite this article:
Baldness Facts for Kids. Kiddle Encyclopedia.