Alphonse of Poitiers facts for kids 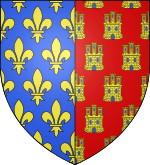 The Treaty of Paris stipulated that a brother of King Louis was to marry Joan of Toulouse, daughter of Raymond VII of Toulouse, and so in 1237 Alphonse married her.

Honest and moderate, protecting the middle classes against exactions of the nobles, he exercised a happy influence upon the south, in spite of his naturally despotic character and his continual and pressing need of money. He is noted for ordering the first recorded local expulsion of Jews, when he did so in Poitou in 1249.

Aside from the crusades, Alfonso stayed primarily in Paris, governing his estates by officials, inspectors who reviewed the officials work, and a constant stream of messages.

When Louis IX again engaged in a crusade (the Eighth Crusade), Alphonse again raised a large sum of money and accompanied his brother. This time, however, he did not return to France, dying while on his way back, probably at Savona in Italy, on 21 August 1271.

All content from Kiddle encyclopedia articles (including the article images and facts) can be freely used under Attribution-ShareAlike license, unless stated otherwise. Cite this article:
Alphonse of Poitiers Facts for Kids. Kiddle Encyclopedia.