Altgeld Hall, located at 1409 West Green Street in Urbana, Illinois on the University of Illinois at Urbana–Champaign (UIUC) campus, was built in 1896–97 and was designed by Nathan Ricker and James McLaren White of the University's architecture department in the Richardsonian Romanesque style. Planning for the building began during the Illinois governorship of John Peter Altgeld. The building was originally the University Library, and received major additions in 1914, 1919, 1926, and 1956. From 1927 to 1955 it was used by the College of Law, and from 1955 on by the Department of Mathematics and the Mathematics Library. The University Chime in the bell tower – which marks the hours, half hours, and quarter hours and plays a ten-minute concert every school day from 12:50–1:00 pm – was installed in 1920. The building was officially named "Altgeld Hall" in 1941.

Altgeld Hall was added to the National Register of Historic Places on April 17, 1970.

Planning for the building started in 1892, with Governor John Peter Altgeld and University President Andrew Sloan Draper involved in the design of the building. Initially, the trustees announced a design contest that would award $1200 to the best design. The trustees awarded the prize to Edward G. Bolles, a young man with no experience in building design, but after the building committee met with the young man, they decided to reject the Bolles entry and all the other entries submitted.

Based on a suggestion made by Governor Altgeld, the building committee offered the commission to Daniel Burnham, fresh from his success as the organizing architect of the 1893 World's Columbian Exposition in Chicago. Artistic conflicts between Burnham and the Governor soon became clear, and the relationship was severed. After two years of looking for an acceptable design, the building committee called upon the university's own architecture department. On February 4, 1896, Professors Nathan Ricker and James McLaren White completed the design plans that included construction costs in less than a month.

Altgeld Hall was one of five Illinois university buildings, the so-called "Altgeld's castles", in whose designs the governor took a personal interest. 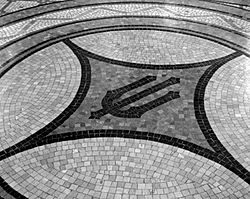 Mosaic floor in the entry way

Construction started on June 10, 1896, only four months after the initial building design was submitted by Ricker and White. The cornerstone, which included a time capsule, was set on September 11, 1896. Ricker and White supervised the construction of the building which was completed on December 1, 1897. 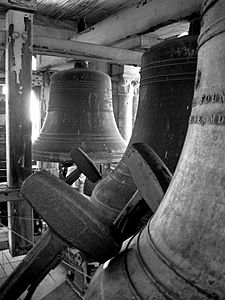 The Altgeld Chimes were installed and dedicated on October 30, 1920. Atop the 132-foot tower are fifteen bells, weighing a total of seven and a half tons, cast by McShane Bell Company. The university’s chime was a gift from the graduating classes of 1914—1921 and the United States School of Military Aeronautics. The senior class of 1922 purchased a Seth Thomas clock mechanism that allows the chime to play the Westminster chime to mark the hours and the quarters. The mechanism does not currently operate.

A small playing chamber is inside the tower containing a wooden chimestand with fifteen pump handles that control the clappers inside the bells via steel wires. Each lever is marked with a musical note, which form an almost complete chromatic scale, ranging from low D to high G while missing low D-sharp and both F-naturals. This configuration of bells were cast such that it can play the university fight song “Illinois Loyalty” in the key of D-major. For this reason, songs must often be transposed to keys where F-naturals are not present.

Official concerts are performed every weekday classes are in session from 12:50 to 1:00 PM. Concerts are performed during special occasions, such as Homecoming Weekend, the University of Illinois Founders Day, and Commencement evening. In addition, informal concerts are held randomly throughout the day during the last ten minutes of the hour. It is tradition to play the university’s alma mater, "Hail to the Orange," during every concert. The concerts have been a tradition since 1920 when the university chime was installed.

All content from Kiddle encyclopedia articles (including the article images and facts) can be freely used under Attribution-ShareAlike license, unless stated otherwise. Cite this article:
Altgeld Hall Facts for Kids. Kiddle Encyclopedia.