A picture of the Stormer. 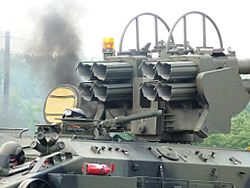 This is a close-up view of the Stormer's missile launcher.

The Alvis Stormer, usually just called the Stormer, was a British armoured vehicle. It was in service with the British Army until mid-2009, when the Stormers were gradually retired.

It was made by the British company Alvis Vickers. Alvis Vickers is now called BAE Systems Global Combat Systems.

There are three different kinds of Stormer. These are:

The British Army use Stormers with the Starstreak missile for short range air defence.

A different kind of Stormer with a flat load bed is used to carry the Shielder minelaying system.

Stormer 30 is a changed Stormer chassis which gives a tracked reconnaissance vehicle. This type has a turret.

The vehicle is still only a prototype. It is unknown when it will enter service. The vehicle will be able to be moved around by the C-130 Hercules used by the RAF aircraft as well as the CH-53, which is currently in service with NATO and other nations across the world.

All content from Kiddle encyclopedia articles (including the article images and facts) can be freely used under Attribution-ShareAlike license, unless stated otherwise. Cite this article:
Alvis Stormer Facts for Kids. Kiddle Encyclopedia.