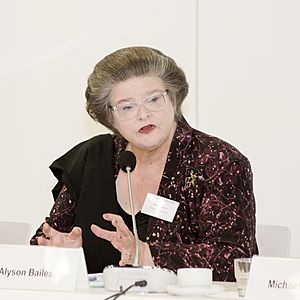 Alyson Judith Kirtley Bailes CMG (6 April 1949 – 29 April 2016) was an English diplomat, political scientist, academic and polyglot. She served as the British Ambassador to Finland from November 2000 to June 2002. She was born in Liverpool.

All content from Kiddle encyclopedia articles (including the article images and facts) can be freely used under Attribution-ShareAlike license, unless stated otherwise. Cite this article:
Alyson Bailes Facts for Kids. Kiddle Encyclopedia.