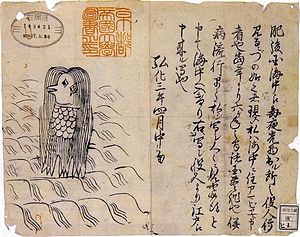 Amabie is a mermaid or merman with three legs in Japanese myths. It is believed that it will emerge from the sea and make prophecies about harvest or epidemic.

It is believed that an amabie appeared before a officer and gave a prophecy that good harvest will get for six years, if disease spread draw its picture and show to the people affected by disease and they will be cured. Believers argue that similar events are reported in different places also.

The STOP! Kansen Kakudai – COVID-19 is a poster by the Ministry of Health, Labour and Welfare.

All content from Kiddle encyclopedia articles (including the article images and facts) can be freely used under Attribution-ShareAlike license, unless stated otherwise. Cite this article:
Amabie Facts for Kids. Kiddle Encyclopedia.