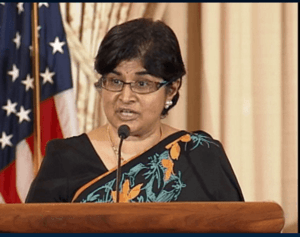 Ambiga Sreenevasan speaks at the International Women of Courage Awards ceremony in 2009.

Ambiga Sreenevasan (born 1956) is a lawyer and human rights advocate from Malaysia. In 2009, she received the International Women of Courage Award.

Sreenevasan went to high school at Convent Bukit Nanasin Kuala Lumpur. in 1979, she got a Bachelor of Laws (LLB) from the University of Exeter in England. She became a lawyer in 1980. She worked in two London law firms, then she became a member of the Malaysian Bar in 1982. In July 2011, she received an Honorary Doctorate in Law (LLD) from the University of Exeter in England.

Sreenevasan was the president of the Malaysian Bar Council from 2007 to 2009. She was also the head of Bersih, an NGO for free and fair elections.

Because Sreenevasan wanted to help with problems between ethnic groups, she received hate mail and death threats. Hundreds of people from religious groups and conservative members of government protested against Sreenevasan at the Bar Council building and called for her arrest.

In 2008, as President of the Malaysian Bar she helped start LAWASIA, the International Bar Association's Human Rights Institute and Transparency International-Malaysia, to study abuses of power.

Sreenevasan said the problems from the first demonstration in 2007 were not fixed, so there was another demonstration.

All content from Kiddle encyclopedia articles (including the article images and facts) can be freely used under Attribution-ShareAlike license, unless stated otherwise. Cite this article:
Ambiga Sreenevasan Facts for Kids. Kiddle Encyclopedia.