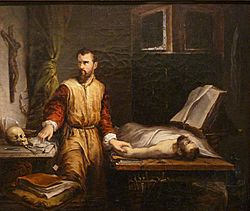 Ambroise Paré and the examination of a patient

Ambroise Paré (1510-1590) was an important French surgeon of the 16th century. He caused a major change in how medicine was practiced. Unlike surgeons before him, he cared about his patients. He worked to promote healing and minimize a patient's pain. His said "I dressed him, God cured him." Paré was a royal surgeon to several French kings including Henry II. He considered by many to be the father of modern surgery.

Paré was born about 1510 in France. His father was a country artisan. As a youth he was an apprentice to a barber. Then he trained as a barber-surgeon in Paris. This was at the Hôtel-Dieu de Paris hospital.

There were three levels of those who practiced medicine. Physicians were at the top and were the only ones who could be members of the Faculty of Medicine. Master surgeons were the next group. Paré belonged to the lowest group, the barber-surgeons. At the time wars were being fought all around him. Battlefield medicine was brutal and dirty. Firearms were a new weapon on the battlefield and were causing new and different wounds. Shrapnel, shot and bullets were a new problem for surgeons. They also believed gunpowder was poisonous. To stop the bleeding, they poured boiling oil over the wound. This burned an already suffering soldier.

In 1536, Paré was a young war surgeon just getting started on the battlefield. He ran out of oil to seal soldiers' wounds after amputations. He made up a mix of egg yolks, oil of roses and turpentine. He applied this to several soldier's wounds. The next morning he was surprised to see those soldiers with the mix he made up were much better than the soldiers who had been scalded. He used ligatures to tie off arteries during amputations to stop bleeding.

Paré wrote his first book, Methods of Treating Wounds, in 1545. He wrote it in French because he did not speak Latin. In 1575 he published his collected works. He was severely criticized by the Faculty of Physicians. This was the top school of physicians in France. Paré was called an ignorant fraud by Etienne Gourmelen, the dean of the Faculty. He stated no books on medicine could be published except through the Faculty of Physicians. Paré had the support of the king so his books sold without the Faculty. He wrote three more books. Paré wrote his own story titled The Apology and Treatise of Ambroise Paré.

All content from Kiddle encyclopedia articles (including the article images and facts) can be freely used under Attribution-ShareAlike license, unless stated otherwise. Cite this article:
Ambroise Paré Facts for Kids. Kiddle Encyclopedia.