The Tangier American Legation (Arabic: المفوضية الأميركية في طنجة; French: Légation américaine de Tanger) is a building in the medina of Tangier, Morocco. The first American public property outside the United States, it commemorates the historic cultural and diplomatic relations between the United States and the Kingdom of Morocco. It is now officially called the Tangier American Legation Institute for Moroccan Studies, and is a cultural center, museum, and a research library, concentrating on Arabic language studies.

The legation was listed on the U.S. National Register of Historic Places on January 8, 1981. U.S. Secretary of the Interior James G. Watt subsequently designated it a National Historic Landmark on December 17, 1982. It is the only listing or designation in a foreign country, excluding those in countries that grew out of the Trust Territory of the Pacific Islands. The building has been listed on the U.S. Secretary of State's Register of Culturally Significant Property, a listing of State Department properties around the world that have particular cultural or historical significance. 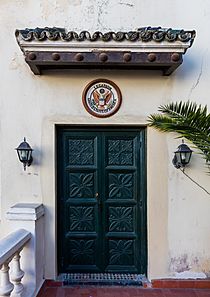 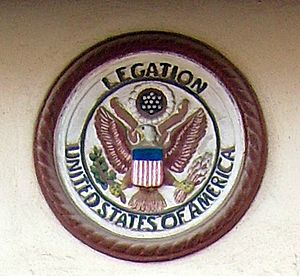 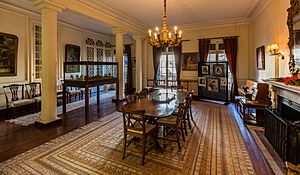 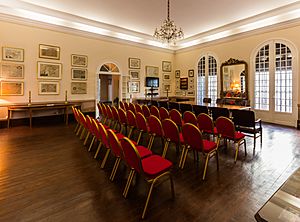 The legation is an elaborate Moorish-style building of stuccoed masonry. This complex structure contains the two-story mud and stone building presented to the United States in 1821 by Sultan Moulay Suliman. The first property acquired abroad by the United States government, it housed the United States Legation and Consulate for 140 years, the longest period any building abroad has been occupied as a United States diplomatic post. It is symbolic of the 1786 Moroccan–American Treaty of Friendship, which is still in force today. The complex expanded over the years as the surrounding houses were bought up. During World War II it served as headquarters for United States intelligence agents.

After the move to Rabat as the diplomatic capital in 1956, when the country gained its independence, the Legation was abandoned as a diplomatic building. Over the years the United States government proceeded to use it as consul offices and Peace Corps offices, among other things. In time it became neglected and threatened with demolition.

In 1976 a group of American citizens established a public, non-profit organization to save the Old American Legation (as it is known locally). Today the Tangier American Legation Museum Society rents the structure, which is still owned by the United States government.

The Tangier American Legation Institute for Moroccan Studies (TALIM) is a museum and cultural center for the study of Morocco and Morocco–United States relations, and it has many paintings by Marguerite McBey and other artists. In 2010, TALIM expanded the original Paul Bowles room to The Paul Bowles Wing, three rooms devoted to the expatriate writer and composer Paul Bowles. In 1999, the Legation received its initial donation of furniture, photographs and documents for the original Paul Bowles Room compiled by Gloria Kirby, a permanent resident of Tanger and friend of Bowles. The museum also has a research library and conference room. TALIM's community outreach programs include Arabic literacy courses for women living in the Tangier medina. John Davison is the current museum director.

All content from Kiddle encyclopedia articles (including the article images and facts) can be freely used under Attribution-ShareAlike license, unless stated otherwise. Cite this article:
American Legation, Tangier Facts for Kids. Kiddle Encyclopedia.