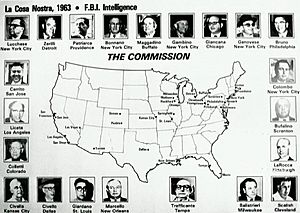 FBI chart of American Mafia bosses across the country in 1963.

The American Mafia (or simply Mob or Mafia in the United States) are an Italian American criminal society who do not carry a formal name. Its members refer to it as Cosa Nostra. They are especially active in New York City, Philadelphia, New England, Detroit and Chicago. Smaller families and crews operate in places like Texas and Los Angeles. Most of the activities performed by the American Mafia, however, are over New England, Northeastern United States and Chicago.

A mafia is a type of organized crime syndicate whose primary activities are protection racketeering, arbitrating disputes between criminals, and brokering and enforcing illegal agreements and transactions. The term "mafia" derives from the Sicilian Mafia.

The Mafia continues to make millions and millions of dollars from not only traditional mob rackets but new and innovative schemes. There have been numerous reports of the Mob's demise over the last decade or so, but families in and outside of New York remain.

All content from Kiddle encyclopedia articles (including the article images and facts) can be freely used under Attribution-ShareAlike license, unless stated otherwise. Cite this article:
American Mafia Facts for Kids. Kiddle Encyclopedia.