The American Thermos Bottle Company Laurel Hill Plant, located in the Laurel Hill section of Norwich, Connecticut, in the United States, includes 11 contributing buildings and two other contributing structures. The original plant was built during 1912–13 and used a historic Italianate house as a company office building. The plant was the primary factory where Thermos brand vacuum flask bottles were manufactured from 1913 to 1984. The plant is historically significant to its connection to the Thermos Company and the history of Norwich. The complex is architecturally significant because it displays the adaptive use of industrial mill design to new industry. It was added to the National Register of Historic Places in 1989.

Since its nomination, numerous changes and renovations have occurred. The surrounding area has seen the construction of condominiums and the large manufacturing building being renovated and re-purposed for loft-style apartments. Renovations on the northern end of the property would require the demolition of two buildings to construct the Integrated Day Charter School. Completed in 2008, a new two-story addition created an indoor gymnasium, kitchen, offices and a new lobby for the school.

The citizens of Norwich, Connecticut, sought out the Thermos company to build and operate a plant on the banks of the Thames River. A group of citizens under the group "Norwich Boomers" rallied the community to purchase 27 acres (11 ha) of land for $750 per acre ($1,900/ha) so that it could be used for the Thermos Plant. The house of Dr. William H. Mason was included in the purchase. The Italianate house was converted to be used as an office building. Together, the citizens and the city raised $78,000. A contract was signed on February 14, 1912, designating Norwich as the home of the Thermos Plant. In return, Thermos would include the city's name in the company's advertisements. Thermos would even mark the products produced in Norwich with "Made in Norwich". Allyn L. Brown acted as attorney and provided counsel for the deal. The construction of the plant was a boon for Norwich, which helped the employment of the area after the decline of the textile industry. The operations expanded into nearby Taftville, operating until they were phased out and shut down in 1988. 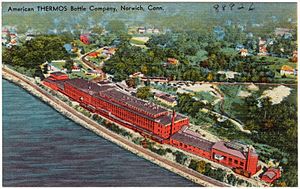 Originally, the plant consisted of the company offices and the large Manufacturing Building. The Mason house, which would become the company office was originally constructed in 1861. It is a two-story brick Italianate style house that was converted to be used as an office building and significantly modified throughout the years. The 1929 addition added a wing that connected it to the metal products building which was built that year. In 1942, a two-story front addition was added and another addition to the west was added around 1950. These additions also resulted in the removal of the cupola, brick chimneys, front entry, and veranda. The Manufacturing building, constructed from 1912 to 1913, is three stories high on the river side and two stories on the east. It is divided into 31 bays with pilasters. At each end of the building are stairs and elevator towers. The structural remains of the original glass house survive as a sub-basement in a one-story extension at the south end of the building.

Modern use and adaptation

The plant was a set in the 1990 movie Everybody Wins, after which the property was partially redeveloped into condominiums. The project failed and resulted in the closure of the Brooklyn Savings Bank in 1990. The Thermos on Thames condominium assets were acquired by the Federal Deposit Insurance Corporation and was purchased by TOT Transfer for $420,000. An auction was held and around $1.2 million was made for the purchase of 25 condominiums, but 55 unsold units were transferred to Real Estate Seizure Sales and 30 acres (12 ha) to Thermos Norwich Developers LLC. The factory was also converted to loft-style apartments.

In 1997, the Integrated Day Charter School renovated a 16,000-square-foot (1,500 m2) section of the factory for use as a school. This required the demolition of two buildings to serve as space for a playground and parking spaces. The total cost of the renovations were estimated at $750,000 and would be partly paid by the State of Connecticut. The renovations were expected to be completed by August 27, 1997, in time for the school's opening. Integrated Day Charter School has a maximum enrollment of 330 students across pre-kindergarten to eighth grade with a majority of children residing in the Norwich area and 15% in nearby towns. The charter school has an application wait list and holds a lottery for admittance of pre-kindergarten students.

Since the time of its NRHP nomination, the plant and the surrounding area have undergone numerous changes which have impacted and removed buildings. The construction of the Integrated Day Charter School removed the Research and Development and Storage Building 1. The "Colosseum" as it was termed, was an outdoor gym which retained sides of the former building. Completed in 2008, the two-story addition created an indoor gymnasium, kitchen, offices and a new lobby for the school at a cost of $2 million. The renovation of the large Manufacturing building included the installation of new windows and energy-efficient roofing along with the installation of modern mechanical, electrical and plumbing systems.

The American Thermos Bottle Company Laurel Hill Plant is historically significant as the primary factory for the production of Thermos bottles that would allow the company to dominate in the world market. It is also historically significant as an example of the Norwich community coming together to attract the company and diversify the local industry. The plant was the primary factory where Thermos bottles were manufactured from raw materials between 1913 and 1984. The complex is architecturally significant as an example of late-19th century and early 20th century industrial mill design being adapted for new industry. The American Thermos Bottle Company Laurel Hill Plant was added to the National Register of Historic Places in 1989.