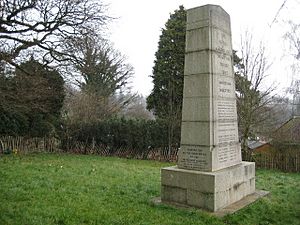 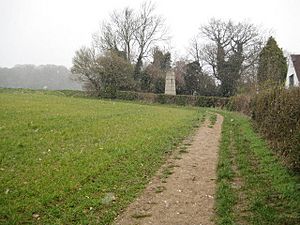 The approach to the memorial

The Amersham Martyrs Memorial is a memorial to Protestant martyrs in Amersham, Buckinghamshire.

It was established in 1931 by The Protestant Alliance. The memorial was unveiled by a Mrs L. R. Raine, a direct descendant of martyr Thomas Harding, who is commemorated on the memorial. It is located near the Rectory or Parsonage Woods opposite Ruccles Field. Access is from a footpath from or a separate footpath from Station Road.

The memorial commemorates the deaths of six local Protestant martyrs and Lollards who were burnt at the stake in 1521. The memorial stands 100 yards from the site of the executions.

At the unveiling of the memorial in 1931 the assembled crowd was exhorted by a speaker to maintain "Protestant King on a Protestant throne and be ruled by a Protestant parliament". The chairman of the Protestant Alliance, Major Richard Rigg, delivered a speech at the unveiling of the memorial and the hymn "For All the Saints" was sung. In his 2019 book Sacred and Secular Martyrdom in Britain and Ireland since 1914, John Wolffe placed the creation of the memorial and others to martyrs in the context of memorials created in the aftermath of the First World War and their accompanying militaristic imagery.

A play about the martyrs, The Life and time of the Martyrs of Amersham and the Community in Which they Lived was staged by the local community in Amersham in March 2016.

IN THE SHALLOW OF DEPRESSION AT
A SPOT 100 YARDS LEFT OF THIS
MONUMENT SEVEN PROTESTANTS, SIX MEN
AND ONE WOMAN WERE BURNED TO DEATH
AT THE STAKE. THEY DIED FOR THE
PRINCIPLES OF RELIGIOUS LIBERTY,
FOR THE RIGHT TO READ AND INTERPRET
THE HOLY SCRIPTURES AND TO WORSHIP
GOD ACCORDING TO THEIR CONSCIENCES
AS REVEALED THROUGH GOD'S HOLY WORD

THEIR NAMES SHALL LIVE FOR EVER

ERECTED 1931 BY THE SUBSCRIBERS OF THE PROTESTANT ALLIANCE
(HENRY FOWLER, GENERAL SECRETARY)
AND BY THE GENEROSITY OF
MRS E.M. ROWCROFT.

All content from Kiddle encyclopedia articles (including the article images and facts) can be freely used under Attribution-ShareAlike license, unless stated otherwise. Cite this article:
Amersham Martyrs Memorial Facts for Kids. Kiddle Encyclopedia.