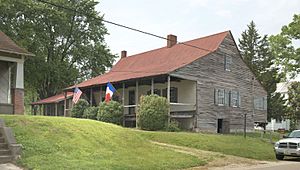 The Amoureux House, sometimes called the Beauvais–Amoureux House, is in Ste. Geneviève, Missouri. It was built in 1792 by Jean-Baptiste St. Gemme Beauvais II who moved from Kaskaskia, Illinois. In 1852, it was purchased by Benjamin C. Amoureux, who immigrated to the United States from France.

It is currently operated as a museum by the National Park Service. It is one of three surviving poteaux-en-terre buildings in Ste. Genevieve and one of five surviving in the entire United States. The other Ste. Genevieve poteaux-en-terre buildings are the Bequette-Ribault House and the Vital St. Gemme Beauvais House I (20 S. Main Street). The remaining two are the LaPointe-Krebs House in Pascagoula, Mississippi and the Badin-Roque House near Natchitoches, Louisiana. The Lasource–Durand Cabin is located behind the Amoureux House.

All content from Kiddle encyclopedia articles (including the article images and facts) can be freely used under Attribution-ShareAlike license, unless stated otherwise. Cite this article:
Amoureux House Facts for Kids. Kiddle Encyclopedia.