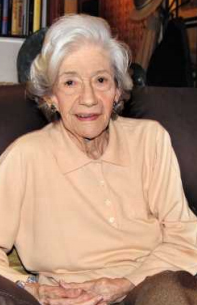 Ana María Matute Ausejo (26 July 1925 – 25 June 2014) was a Spanish writer and member of the Real Academia Española. She is thought to have been one of the most famous writer since the Spanish Civil War.

She was born in Barcelona. She studied at the international school of Hilversum in the Netherlands. She was a guest lecturer to the universities of Oklahoma, Indiana and Virginia.

All content from Kiddle encyclopedia articles (including the article images and facts) can be freely used under Attribution-ShareAlike license, unless stated otherwise. Cite this article:
Ana María Matute Facts for Kids. Kiddle Encyclopedia.