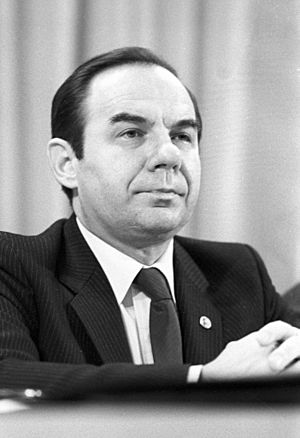 Anatoly Andreyevich Gromyko (Russian: Анато́лий Андре́евич Громы́ко, 15 April 1932 – 25 September 2017) was a Soviet and Russian scientist and diplomat. He was born in Barysaw, Soviet Union. He specialized in American and African studies as well as international relations. He was a member of the Russian Academy of Sciences and the Union of Russian Artists.

Between 1961 and 1965 worked at the Soviet Embassy to the United Kingdom. After that he took leading positions at the Institute for African Studies and Institute for US and Canadian Studies of the Russian Academy of Sciences. He then returned to diplomacy and acted as the Soviet deputy ambassador in the United States (1973–74) and East Germany (1974–75).

All content from Kiddle encyclopedia articles (including the article images and facts) can be freely used under Attribution-ShareAlike license, unless stated otherwise. Cite this article:
Anatoly Gromyko Facts for Kids. Kiddle Encyclopedia.