Anchistea is a genus of leptosporangiate ferns in the family Blechnaceae. It has only one species, Anchistea virginica (synonym Woodwardia virginica) the Virginia chain fern, which has long creeping, scaly, underground stems or rhizomes giving rise to tall (up to about 4 feet, 120 centimetres) widely separated, deciduous, single leaves. In contrast, the leaves of Osmundastrum cinnamomeum, which can be mistaken for A. virginica, grow in a group from a crown. Also in contrast to O. cinnamomeum the leaves are monomorphic without distinct fertile fronds. The lower petiole or stipe is dark purple to black, shiny and swollen, the upper rachis is dull green. The leaf blade is green and lanceolate, composed of 12 to 23 paired, alternate pinnatifid pinnae. The pinnae are subdivided into 15 to 20 paired segments that are ovate to oblong. The lower rachis is naked for about half its length. The sori or spore-producing bodies are found on the underside of the pinnae and are long and form a double row which outlines the major veins of the pinnae. In common with all ferns, A. virginica exhibits a gametophyte stage in its life cycle (alternation of generations) and develops a haploid reproductive prothallus as an independent plant. The spores are produced in red-brown sori which line the spaces (areolae) between the costa and costules. Further photographs can be found at the Connecticut Botanical Society and Ontario Ferns websites.

Anchistea virginica was first described by Carl Linnaeus in 1771 as Blechnum virginicum. It was transferred to Woodwardia by James Edward Smith in 1793, and to Anchistea by Carl Presl in 1851. Some sources retain it in Woodwardia, but the Pteridophyte Phylogeny Group classification of 2016 (PPG I) retains Presl's genus, making it the sole species in Anchistea.

Anchistea virginica has been found as a fossil in the Middle Miocene of Central Washington state. At that time it apparently grew in similar habitats and was associated with similar species to the present.

Endemic to eastern North America from Florida to Nova Scotia and west to Michigan and Illinois. A. virginica is mostly found on the Atlantic coastal plain and Piedmont although it also grows in the eastern Great Lakes region as far west as Illinois. The Flora of North America website has a distribution map. 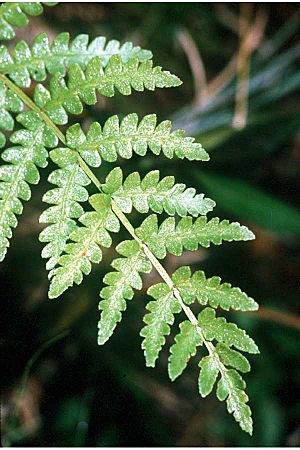 The plant is occasionally cultivated as a greenhouse or garden ornamental. Hardy to USDA Zone 3.

All content from Kiddle encyclopedia articles (including the article images and facts) can be freely used under Attribution-ShareAlike license, unless stated otherwise. Cite this article:
Anchistea Facts for Kids. Kiddle Encyclopedia.