Ancient Egyptian concept of the soul facts for kids 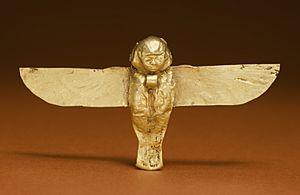 This golden Bâ amulet from the Ptolemaic period would have been worn as an apotropaic device. Walters Art Museum, Baltimore

The Egyptians believed the heart held the emotions and thoughts. Believed to be weighed on the scales of Anubis by the feather of Maat. The Ib decided what happened to you after death.

Given at birth. A person was believed to live as long as their name lasted. Egyptians often went to great lengths to keep their names talked about and had them carved into monuments and surrounded by cartouche (magical rope).

Ba is considered the spirit. Ba is believed to have a unique personality based on the person who has it. The Ba was shown as a bird that flew from the body to unite with the Ka at death.

One of the five parts of the Egyptian idea of the soul. The Ka was thought of as the life force and left the body during death. Ka was believed to be in food and drink and was placed with the dead for offerings. Egyptian Mythology believes that at death the Ba and the Ka unite through Nehebkau before entering Duat.

All content from Kiddle encyclopedia articles (including the article images and facts) can be freely used under Attribution-ShareAlike license, unless stated otherwise. Cite this article:
Ancient Egyptian concept of the soul Facts for Kids. Kiddle Encyclopedia.